How to Choose Between Night Vision and Thermal Optics for Hunting

Though not the most frequently chosen time of day for hunting, the night offers a whole new experience to those who are bold to enter the premises of the nocturnal realm. Everything around you changes its colors, and the rhythms and sounds of the day are replaced by melodies of night. Nocturnal animals wake from their slumber while the night sets the stage for a whole new misteria to happen. Just like big cities, the forest is never fully asleep. There is always someone lurking in the shadows with intentions unknown to us. And all this beauty often stays unnoticed, not because we aren’t able to appreciate it, but rather because we cannot see a thing.

Evolution has endowed humans with poor night vision compared to many animals. It’s not that there was a trade-off of any kind, but we got many other evolutionary superior features instead. The ability to create new things is one of them. If we can’t see in the dark naturally, we’ll come up with a way to do so artificially. Like with countless other issues, technological progress has allowed us to solve many a problem humans face, the inability to see at night included. Initially developed for military needs, the night vision technology has found many uses in other spheres of our lives, including navigation, surveillance, search and rescue, and hunting.

Night vision is an umbrella term that covers all technologies that allow a person to see in the darkness or low-light conditions. As with many other things in the world, there are several technologies that have different principles at their core. Before we start throwing pieces of advice, it might be useful to name those technologies and set out the basic principles of their work.

There are three main night vision technologies: image intensification, near-infrared illumination, and thermal imaging. All three are actively implemented in different spheres of our life, depending on the desired result and the environment’s light accessibility. Light is an essential condition of seeing for humans, that’s why we have a hard time observing the world in low-lit or dark areas. However, things are a bit different with night vision technologies.

This technology is aimed at improving image quality in low light conditions through a special device called (you’d never guess) image intensifier that amplifies the available light. These devices rely on gathering existing light similar to human eyes. The vacuum-tube image intensifier generates a picture from a very small number of photons (gathered in starlight or moonlight) that strike a charged photocathode plate, which emits electrons when light or radiant energy focuses on it. This results in electrons being emitted through a vacuum tube and striking the microchannel plate and specially coated internal walls, creating even a denser cloud of electrons. As a result, the image screen shows a picture in the same pattern as the light that strikes the photocathode plate but on the wavelength perceived by a human eye. To put it simply, it gathers the existing light and intensifies it to make the picture visible to us. This technology may be more or less beneficial depending on the environment, but we’ll return to the pros and cons later in the article.

This technology utilizes image intensification with an extra source of the near or shortwave infrared light invisible to the human eye. You can compare it to a flashlight that illuminates an object without your seeing it. Active illumination night vision systems incorporate illuminators capable of producing infrared light, resulting in the highest resolution image among all night vision devices. The infrared waves that illuminators emit are not visible to the human eye but can be perceived through a device that captures the light of this wavelength (like infrared cameras). This technology found its use in commercial, residential, and government security applications, where it ensures high-quality surveillance in low-light conditions. Active illumination night vision devices are not used in military operations, as there is a risk of giving away your position since infrared light is visible through night vision goggles. Infrared illumination devices utilize illuminators of three types: incandescent lamps, LED, and lasers. Lasers provide the best quality image but are also the most costly option of the three. Since this technology is majorly exclusive to surveillance cameras and is not widely used for night vision hunting scopes, we’ll enlist its advantages right away and won’t return to it again. 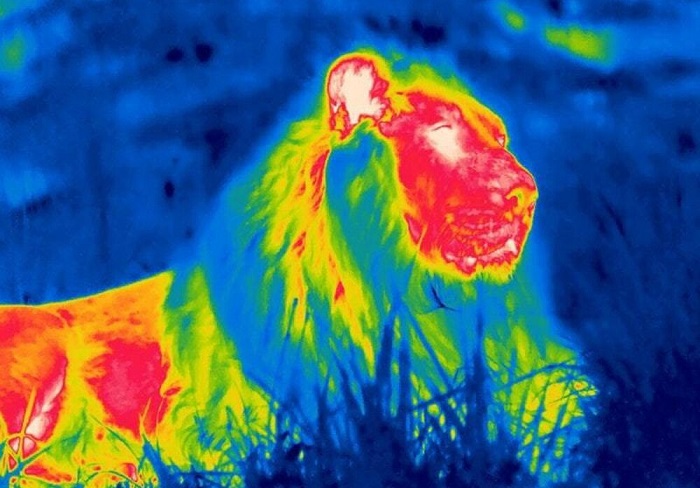 This is the only type of night vision that can work in absolute darkness as it doesn’t rely on any visible light. Instead, thermal imaging technology detects and measures the temperature difference between background and foreground objects with the help of a bolometer. Thermal night vision devices identify thermal radiation that all objects emit due to the constant movement of electrons within atoms. Such devices are capable of picking up even the smallest variations in temperature and converting them into digital images that depict shapes of objects in various colors depending on the intensity of infrared radiation. The obvious benefit of this type of night vision is its versatility: it can work in any environment regardless of the lighting conditions. However, if things were that simple and one technology outcompeted the others, it would be the only type of night vision on the market. The question is, which technology is more suitable for hunting? 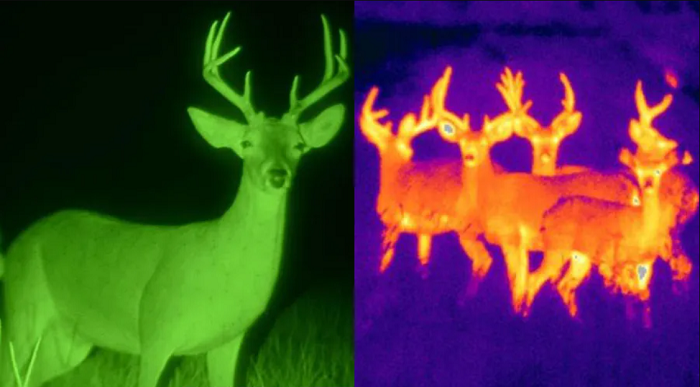 If you are looking for a scope for night hunting, you’ve probably come across topics called “thermal vs. night vision” or “infrared vs. night vision” which is a bit strange since, as we now know, both of those names refer to night vision technologies. The most common choice that a hunter might face in a situation like this is between optics that rely on light and devices that rely on thermal radiation. For brevity’s sake, we’ll further refer to image intensification night vision devices as shortened “night vision”, while thermal imaging devices will be referred to as thermal or infrared.

There are two aspects that one should consider: desired image and the characteristics of the device.

The practical side of things remains regardless of your personal preferences. Everybody wants to get their money’s worth and know how durable their acquisition is. Night vision scopes tend to be lighter, more durable, and affordable than infrared scopes, but they can’t boast their opponent’s range of operation. You also need to keep in mind that night vision scopes are to be used only in dim light and not because the name suggests so, but because it may affect your scope’s performance. Being exposed to bright light hampers your vision, and the same applies to night vision devices since they work on the same principles. Thermal scopes, on the other hand, can be used at any time of day since they don’t need light to operate. If you have a tight budget and don’t want to be unreasonably careful to prevent anything from affecting your purchase, you might want to buy a night vision scope. If money is not a problem, and you want a more sophisticated device with potential zooming ability, the thermal scope will meet your needs.

What is it that you’d like to see? Night vision and thermal scopes provide different pictures and are useful in different situations. If you need a more detailed image that will allow you to identify the target, Night vision devices take the cake since this is the field where they outperform thermal scopes. The last, however, performs equally well in another situation: target detection. Thermal scopes will show you any living creature as a fiery aura on the cold blue background, leaving you no chance to miss it. Night vision scopes work the same way our eyes do, so if you were likely to miss the animal with your own eyes because it hides too well, this kind of optics won’t help you much. Thermal imaging scopes, however, can even see through concealment like fog and precipitation and even catch the heat signature of a fresh trail.

As you can see, the question of night vision vs. thermal imaging is about your needs, not about general quality. If having a detailed image is your priority, go for night vision scopes. Should you need to detect your target as soon as possible in somewhat concealed conditions, then thermal scopes will be of great help.

Source
How to Choose Between Night Vision and Thermal Optics for Hunting is written by Timothy Chandler for blog.gritrsports.com

Keep Germs and Infections Out! – Aboblist